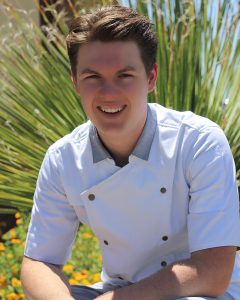 Peter McQuaid jumped into the culinary world working for famed Chefs Silvana Salcido Esparza, assisting her in the opening of her latest concept. Working side by side Chef Esparza truly made Peter's dream a reality by launching his culinary career. Peter then began working under Chef Beau MacMillan at the Sanctuary on Camelback Mountain Resort to further is experience in the restaurant industry. Peter is a proud alum of the Careers through Culinary Arts Program and has successfully competed in their annual competition which allowed him to attend culinary school at the International Culinary Center in New York City. Whilst living in The Big Apple, Peter met famed Chef Daniel Boulud at a gala dinner honoring Chef Roger Verge. Peter recalls Chef Daniel asking him “what do you do in weekends when you're not in school?” After an awkward staredown, Daniel said “you're working for me, that's what.” Peter soon began working at Chef Boulud's infamous 3 Michelin Starred flagship restaurant, Restaurant Daniel. Working at Daniel immersed Peter in the beauty of modern French cuisine. Peter also took on internships at Daniel Humm's Eleven Madison Park, David Chang's Momofuku and Grant Achatz's Alinea, where he was able to rub elbows with some of the most celebrated chefs of our time.

Upon returning to Arizona; Peter created Emulsion Popups, a series of popup restaurants that all embodied a unique theme and experience. Peter gained statewide recognition in the creation and execution of his dinner series. Most recently Peter is back at the very place that put his culinary career in full motion, The Sanctuary Resort where he holds the title of Sous Chef. Peter has also been the private chef for the former UFC Commentator Michael Goldberg and has privately cooked for many distinguished clients including singer, Alicia Keys and the Arizona Cardinal's, AQ Shipley. He has also been featured in Phoenix Magazine and was the recipient of the prestigious James Beard Foundation’s Taste America Award at the JBF Taste America tour in Phoenix.

Chef Peter is now thrilled to be able to share his passion for food and hospitality with every guest at Mustang Monument as our Executive Chef. Peter believes in letting his food speak for itself by using fresh local ingredients and classic cooking techniques. Peter brings a wealth of knowledge and excitement to Mustang Monument's culinary program, he will be featuring cooking classes as well as making each and every meal a true lifetime experience.

We use cookies to ensure that we give you the best experience on our website. If you continue to use this site we will assume that you are happy with it.OkPrivacy policy